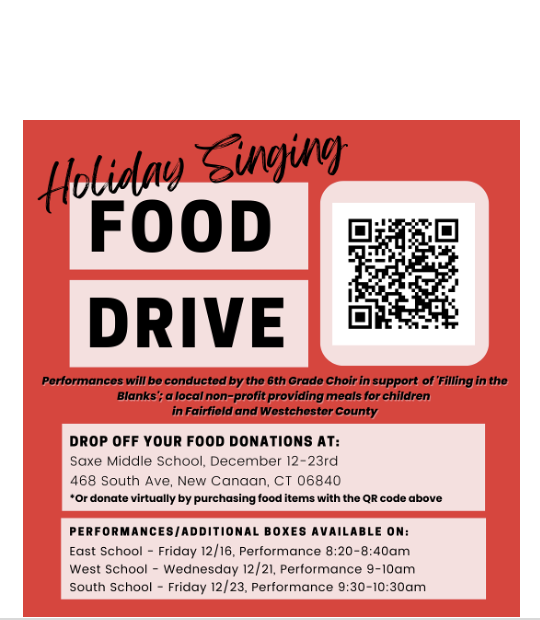 The 6th Grade Chorus students at Saxe Middle School are opening their hearts to their music and their community by organizing a food drive with singing performances for Filling in the Blanks, a non-profit dedicated to providing meals to children in need within Fairfield and Westchester County. Performances will be held at:

Donation boxes will remain at the front of Saxe Middle School from December 12th to January 12th, with additional boxes placed at the NCPS elementary schools on performance days.

Students will be performing "Seize the Day" by Alan Menken, a powerful song from the Broadway musical, The Newsies, which depicts the tale of the Newsboys' of New York in the late 1800s and the hurdles they faced with almost no worker's rights.

The plot and setting of The Newsies was the precipice for this charity event. After learning about the Newsboys' Strike of 1899, the choir class opened up to an honest and meaningful dialogue about what thoughts and ideas each person was willing to fight for. Students discussed a variety of things, including the importance of standing up for friends, family, and people in need, and with that, they began to ask, "What can we do to help?"

With an overwhelming yes to support a local cause or charity, students ultimately selected childhood hunger as their cause. Nearly 65 students have volunteered to help organize and run the food drive for Filling in the Blanks and will be donating.

To contribute to an online donation, please click here.